A brief description on the film Hacksaw Ridge and its subject, including connections to Lynchburg.

Articles and websites with more information:

Why Is This Name Familiar?

If you drive in Lynchburg, you may have driven on the Desmond T. Doss Memorial Expressway along North 501 and near the Peaks View Park Exit.

Named in honor of Desmond T. Doss, an observant member of the faith, the Potomac Conference of Seventh-Day Adventists operates the Doss Christian Academy in Lynchburg, Virginia, near Hwy 29 toward the airport.

Born and raised in Lynchburg, Virginia, in 1919, Doss lived in Fairview Heights with his siblings, as his father worked as a carpenter and his mother worked in the local shoe factory.  His mother instilled in him the value of faith and a life spent helping others according to devout Seventh Day Adventist creeds, such as keep the Sabbath, practice nonviolence, and maintain a healthy lifestyle.  Doss once walked six miles, round trip, to donate blood to critically ill car accident victims from nearby Hwy 29.

After he entered the army during World War II, Doss expressed his need to keep his pre-war peaceful life -- including refusing to carry or use an army-issued weapon to kill during combat -- to his superiors.  It was an astonishing request.

Doss became an army medic in the Pacific theater.  He referred to his service as "conscientious collaboration."

What Is Hacksaw Ridge? 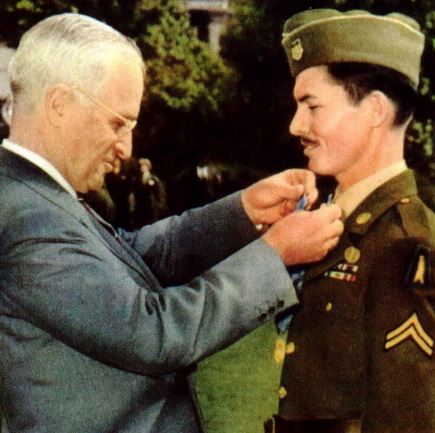 During the Battle of Okinawa, the Maeda escarpment became known as "Hacksaw Ridge" due to its sudden steep elevation.  It was a difficult battlefield.  Doss' unit was deployed, from April 29 to May 21, 1944, on the continuing mission to gain and keep this ground.  When others fell back on May 5, he remained on the escarpment, pulling wounded comrades away from the sight of snipers, exploding mortars, and the threat of hand-to-hand combat.  At one point he dressed his own serious wounds so another medic would not be forced to brave the field.  In one night he estimated he had saved 50 individuals, while his superiors claimed 100, and therefore they settled on 75 people whom Doss lowered by rope sling from the ridge to safety.  Doss was awarded the Bronze Star, three Purple Hearts, the Congressional Medal of Honor, and a host of other awards for his service in Guam and Okinawa.

After the war, Desmond T. Doss established a farm with his wife and son in Georgia.  He died in 2006.